I used to hate Halloween. If I'd wanted kids to practise extortion with threats I'd have steered them towards a career in banking instead of sending them forth to wrest sweets from old ladies. And I'd never believed in ghouls.

Then came my comeuppance. At nightfall, while trick or treaters roamed our streets, I was ambushed by a monster. It was a scrawny, slimy monster with purple flesh and scaly legs. There was a dripping hole where its face should have been and two pulsing bulges for eyes.

My tranquil nights became hellish. The monster roared through the darkest hours. It seeped toxic mucus and it gnawed at my flesh. The more it gnawed, the larger it grew and slowly I realised that it wasn't my flesh it was gnawing, it was my heart.

My monster had enslaved me and, in doing so, he had turned me into a monster. I would have vanquished any soul who prevented his flourishing and felled any predator who caused him harm.

And he had turned me into a paragon. I would surrender my last morsel for his nourishment and lay down my life for his own.

In the eight years since, I have tamed my wee monster and he has transformed me. The terror, if anything has grown. That long-ago night it was the threat of the unknown; now it's the fear that I might fail him.

But these days, though I still hate trick or treating, I embrace Halloween with gusto, for I've learned that life without that terrifying arrival would be monstrous.

Happy Birthday to my little boy! 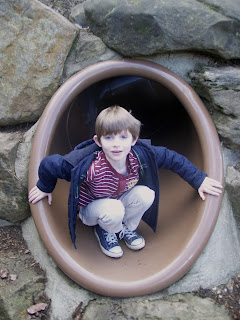