Driving Parents Round the Bend

Now her language has become more decorous as she steers a Skoda across the roof of a car park and topples a bollard. And she keeps a cool that would elude me as she dodges an oncoming car and brakes just before the wall that separates us from a five-storey drop onto the Brent Cross retail park.

Multi-storey car parks do not bring out the best in my character, but my 13-year-old shows signs of being superior in temperament and skill. Behind, her 11-year-old brother reverses tidily into a free parking space. Unlike me he collects no strangers' wing mirrors in the manoeuvre. I, meanwhile, am still recuperating from wrestling my own Skoda through the perils of the North Circular to get here. I had to get the Vicar to park it.

The children are having their first driving lesson. They have yet to learn how to work the washing machine, turn off the bath taps or flush the lavatory, but I don't let youth and inexperience stand in the way of mastering clutch control high over the London rooftops.

Young Drivers, which offers lessons for 11-17 year olds on sites across the country, cites road safety as the, er, driving force behind its programmes. Research from Sweden shows that accidents are cut by 40 per cent if drivers get behind the wheel early enough and, the thinking continues, children are safer crossing the road if they have experienced how the world looks through a windscreen. As my mother was run over on a zebra crossing, that strikes me a good enough reason put my babies in charge of two hatchbacks.

The lessons in dual-control cars follow the Driving Standards Agency curriculum so the pupils learn the same skills as 17-year-olds training for their driving test with instructors who, on weekdays, work for adult driving schools. The difference is that children are easier to teach. 'The younger the child the more receptive they are,' says the manager of the Brent Cross branch, Carmine Mastrogiacomo. 'By 17 they have started to form their own opinions about techniques.'

The off-road sites are kitted out with cones and signs and children spend the session negotiating them. Steering, apparently, is the hardest skill to master. 'A lot of children are used to steering wheels with Playstation and Go karts and are taken aback at how much further you have to rotate to turn a  car,' says Mastrogiacomo. 'They also tend to look at the bonnet instead of where they want to go.'

Steering, concurs the 13 year-old, was the greatest challenge, whereas the 11-year-old was daunted by the clutch when stopping and by tight bends in the figure of eights sketched in plastic cones. By the end of the hour both had completed Level 1 which encompasses starting, stopping and steering. By the end of Level 6 drivers will have learnt to judge speed and distance and practised overtaking and parallel parking. Crucially, they should know to brake when confronted by old ladies crossing zebras, although traffic and pedestrians will come as a shock when they are old enough to be unleashed on public highways.

For the 13-year-old the experience was revelatory. 'When you see your parents driving it looks easy, but it isn't,' she says. 'Now I know how scary it can be I might be a bit more accepting of Dad's swearing!' 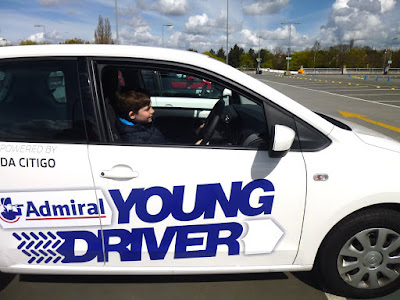