Showing posts from January, 2013
Show All

January 31, 2013
My children have not turned out how I intended. Yes, I read all the books. I nodded along to features on perfect parenting and honed my prejudices against mothers who fell short of my ideals. Yet things went awry within weeks of my eldest's birth and it's been downhill all the way since then. I'd resolved, you see, on rearing children who: Owned only three toys, all of hand-crafted wood, plus a single teddy bear. Ate the green twirly things excavated from my garden with gratitude and with cutlery. Begged the Hoover off me to fine-tune their bedrooms. Thought an iPod was a hybrid vegetable. Turned their private desks into a homework hub. Greeted the Sunday faithful with smiling enquiries after their health. Instead, my children: Single-handedly turned Fisher-Price into a global empire and would sink Noah's Ark with their menagerie of stuffed animals. Eat only fish-fingers and chipolatas - with their fingers. Beg a step ladder off me to surmount the impenetra
36 comments
Read more 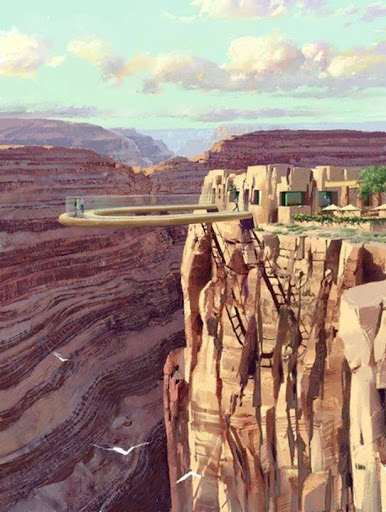 This picture is the prompt for the latest 100 Word Challenge over at Julia's Place . Now if I were one of those figures on that flimsy protruberance I would be worrying like heck that the architect had got his calculations right. And maybe that's why the picture made me think of death - or more particularly of an interview I heard yesterday with the guitarist Wilko Johnson who has been given ten months to live.  The man sounded positively jubilant as he recounted how the imminence of his end has liberated him from the preoccupations that blinker us all. Eyes trained on the chasm of the future tend to be blind to the Now. A tracery of branches, the smile of a child are eclipsed by mortgage angst and to-do lists.   But the dying man is clear-sighted. 'Every cold breeze against your cheek, every brick in the road makes you feel alive,' he says. 'There is this marvellous feeling of freedom. Why didn't I work out before that it's just the moment you'r
20 comments
Read more

January 23, 2013
The secret to surviving middle age, says a survey, is a good marriage, a good breakfast and a puppy. The Vicar and I have spent 13 years-worth of contented evenings side by side under our tartan rugs; I never confront a day without sultana bran inside me and, although I can't vouch for the power of a pup, I seem to be plodding reliably through middle-age, so I assume two cats can count. But there is more to marriage than this. It has, finds a different survey, an enhancing effect on men's bodies and women's minds. And men who wish to push those enhanced bodies into antiquity, while steering clear of Alzheimers, should, according to a third poll, select wives who are younger than them and clever to boot. So far so good. I'm a year younger than the Vicar and, unlike him, I've mastered the purpose of all the attachments on our vacuum cleaner, so I am most probably clever. He can pace the Seven Sisters without a stroke and my mind has undoubtedly flourished on a dinne
41 comments
Read more 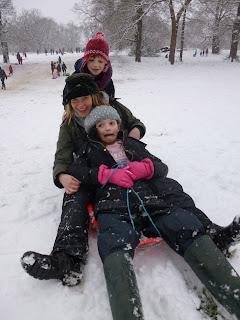 On Sunday the extreme weather meant I had to find a daring new approach to parish rounds. I'd long suspected that beneath my church hat lurked a Hell's Angel and, after decades of demureness, I decided it was time to take blameless parishioners for a ride. High on speed, I eliminated all, even the church verger, who stood in my path... ..and resolved to show the world I was a woman with balls. My ruthlessness, though, proved to be my downfall: So now I am resigned to life in the slow lane. But I have bought a racy new hat to live it in! This week's challenge at Julia's Place requires us to add 100 words to the words the extreme weather meant . But, naturally, I was going to write about the snow anyway...
32 comments
Read more

How to be a Domestic Goddess

January 17, 2013
Since Christmas I've felt shiftless. I've peered into the cobwebbed corners of my soul to pinpoint the malaise. True, it's a dismal feeling, after months of anticipation, to know that I've ridden the Santa Express through the local garden centre for the last time this winter. It was upsetting to hoof our friendly Christmas tree onto the cold pavement on Twelfth Night and I am being persecuted by boxes of Ferraro Rocher, which multiply unpalatably across the vicarage as fast as I offload them. But these private pains don't give me my answer. Then, suddenly, I find it in a bottle of Fairy Liquid. I am shiftless because, when Christmas faded out, so did the sustaining mounds of washing up. No sane person enjoys the scabbed dishes from a family supper, but the dramatic aftermath of a banquet is one of the pleasures of the festive season. You can put on Act III of a grand opera (you can rely on everyone melodiously dying in Act III), shut the door, snaffle choice lef
21 comments
Read more

January 13, 2013
I try to cultivate an air of pious decorum in church. My woolly layers, a vital buffer against the chill of the pew, imply solid respectability. My hat conceals the twelve months since I last visited a hairdresser and my expression of rapt enlightenment, rehearsed in the shaving mirror, disguises my internal warfare over the pea-green jeans in the Boden catalogue during the parish notices. The advent of children has not aided my endeavours, however. Since the moment of my son's baptism when my daughter slashed the silence with: 'Mummy hit me!' it's been downhill all the way. 'Baby's fallen in Jesus pond!' cried my son, panicked, as, one Sunday, a proud father filmed another solemn gathering round a font. The passing of the years would instil in them due reverence, I thought. Tirelessly in Sunday School I turned loo roll tubes into saints and conjured flocks of sheep from Whiskas boxes to prompt their spiritual awakening. But a decade on, my resolve to be
17 comments
Read more

January 07, 2013
I never was one for parties. Higher heels and shorter skirts would enhance my social appetite, my mother told me, but parties surveyed from stilettos seemed to me the same cacophonous Babel as parties endured in the tweed twin set the churchwarden had outgrown. My tentative opinions on coir-based composts and Primark polyknits packed no punch amid such fevered networking. I judged my impact on the number of handshakes I received, on the number of glazed eyes and, once, on a Valentine's proposition which turned out to be from an octogenarian with a urinary tract disorder whom I'd steered to the Gents. Nowadays, however, social gatherings have acquired new meaning. My insights into vacuum cleaners and Bourbon Creams and my passing pleasantries to strangers are validated by a mark out of 100. At the end of a month of small talk I can measure my success with a Klout score. Where once monologues about my daily routines would have cleared a room, they now collect a gratifying t
29 comments
Read more

January 03, 2013
For three days I have been liberated. I had left my handbag at the wrong end of London and so, without a purse, I was spared the exhausting compulsion to traipse round the sales. I had mislaid my mobile in the under-stairs cupboard and so was sheltered from inconvenient phone calls. My 10-year-old had lost my hairbrush and since my comb was 60 miles away in said handbag I was excused the bore of daily grooming. And I was without my children. 'I've never left my children for a single night,' said the lady on the bus. 'I couldn't bear to think of anyone else doing their breakfasts and bedtimes.' We marvelled at each other like two opposing zoological species. 'I must,' I replied brightly, 'be an unnatural mother!' Unnaturalness, the lady on the bus doesn't realise, has many advantages. It allowed the Vicar and me to walk 20 miles of cliff tops without whinging impediments. It granted us a nightly pint in a Tudor pub, unimpeded novel re
30 comments
Read more
More posts