November 11, 2012
It is the Sunday service and the Vicar is preaching about mementos. We all gaze appreciatively at his late father's qualification from the Royal Institute of Chartered Accountants and his certificate from the Royal Life-Saving Society. Then he draws out a large framed photo of his sister's old school friend.


The friend, he tells the assembled cubs and scouts, had raven hair and filmic cheekbones and, on a family trip to a fairground, he made sure that he shared a pod with her on one of the rides. Unfortunately the ride was a fast and furious one and unfortunately he had just eaten a large portion of chips. The vicar-to-be threw up all over the school friend's shapely knees.

The memory, he says, came back to haunt him last year when he saw his sister's old friend in the national newspapers - and he draws forth another framed photo: 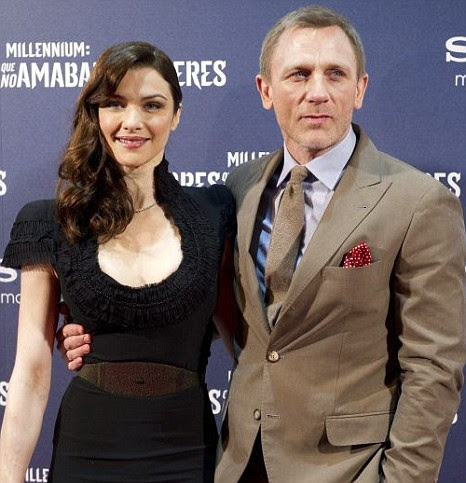 If it hadn't been for those volatile chips, he concluded, he, not Daniel Craig, might have become Mr Rachel Weisz.

The congregation swivels to watch my reaction. I smile serenely in what I hope is a filmic fashion, but I regret the knobbled woollen tights that buffer me from the cold of the pew and I regret the used tissue that has just slithered from my sleeve.

Then, suddenly, I'm seized by joyous enlightenment. Every good man deserves to have his fantasies realised and I shall sacrifice myself to embody the Vicar's. I shall decline to make chutney for the  Christmas bazaar and leave off baking for the weekly church tea. I shall swap my M&S polyknits for Stella McCartney and bed down nightly with Dr Colbert's Facial Discs.

I'll need an allowance to fund my transformation, of course, so the Vicar will have to divert a portion of his stipend to lay in some L'Oreal. And he'll have to make other adjustments. I doubt Rachel Weisz would accommodate his afternoon nap and he'll need to clear his diary to babysit while I'm night-clubbing in Soho.

The Vicar places the two photographs back in his father's old brief case and I stuff the tissue further up my sleeve. I am agog to get back to the vicarage and Google Jimmy Choos. For I intend to start my reincarnation immediately - just as soon as I've finished Hoovering the Vicar's study.