September 03, 2012
Last week a security man at London's Natural History Museum asked to search my handbag. I was dismayed. I have, you see, things to hide. Things that I really do not wish London's security officials to know about. Should some of these things come to light, my good standing in the community could be gravely undermined.
The man, however, was ruthless. He rummaged unfeelingly through my capacious companion and exposed my guiltiest secrets to public scrutiny. For all those in the queue behind me could see that within the elegant contours of my leather Bridge bag lurked: 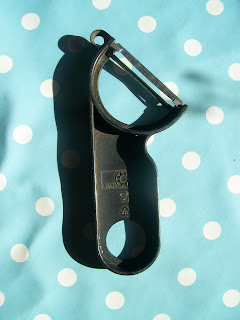 I'm not sure why I carry a potato peeler. Probably it dates from my backpacking days in Eastern Europe when I had to seize any culinary opportunity that came my way. For those who scoff, how do you know you won't find yourself in the middle of a carrot field one day, and require instant gratification? 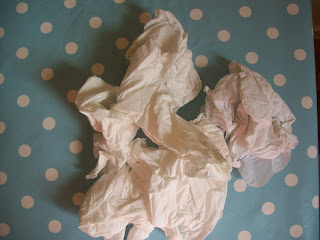 Yes, I do have those sophisticated tissues in neat plastic packages, but I don't ever open them if I can help it, for they work out at nearly 10p a nose blow. Some of the above probably aren't mine. They are thrust at me, limp with sinister fluids, after the children have borrowed them in a bin-free environment. 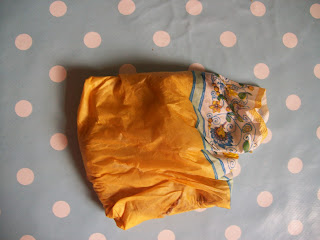 I have no idea what this is, but I know what I fear it is: a piece of left-over cake from a children's party. What unnerves me is that the last party either of my children attended was a full month ago. 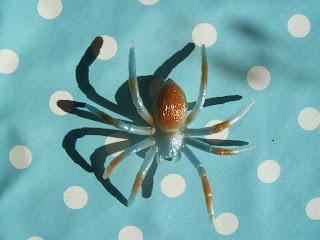 I don't know how this plastic spider got there either. I was about to bin it when it occurred to me that I could balance it on my editor's in-tray. She shrieked and buckled in the middle of a telephone interview. I had no idea she was an arachnophobic. I've kept it, after that success, because it might liven up the next long meeting about the church fete. 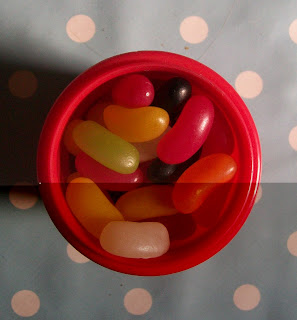 This is a pot of magic medicine. It's efficacy is miraculous. Any childish hurt is almost instantly soothed by a single dose. Some of them contain laughing or dancing or singing spells which help revive the patient remarkably to the enjoyment of all around. I wouldn't dare venture outside without it. 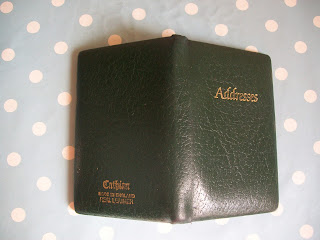 Younger readers won't recognise this. It's called an address book and I use it for putting people's phone numbers in because I can never remember how to programme them into my mobile. New acquaintances, whom I judge won't be around long enough to justify a permanent inked slot, get detailed on Post-it notes and stored in a drawer. Friendships that just might blossom are recorded in the book in pencil. Most of the inked entries are dead. 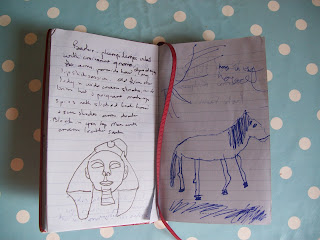 This is a notebook - a necessity in case I should have a Great Thought. I've had this one for three years and it's mostly full of shopping lists, infant doodles and odd fragments of gossip that I want to remember for my diary. I'm mystified by the scribbled words: 'Barbie - plump, limp and viled with croissant grease' and by a phone number for Bill. Who's Bill? 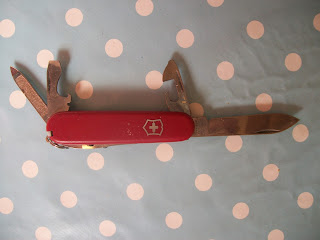 The above arouses intense jealousy in men. The security guard at the museum insisted on borrowing it while I studied the exhibits and the bloke at the airport harboured it for the entire duration of my holiday. Actually, I've hardly ever used it, but I'm anticipating that it will save the day if I have to perform  emergency surgery or open a beer bottle. 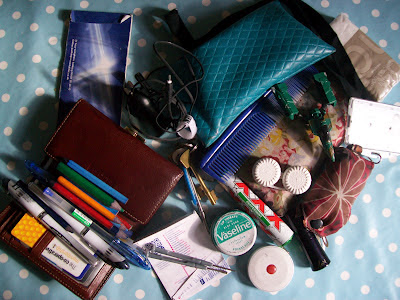 These are the rest of my daily essentials. Things like screwdrivers and measuring tape and train timetables and emergency supplies of Vaseline and Extra Strong Mints. And a plastic fighter aircraft. I didn't photograph the menacing thing I found stuck to the dusty lining. Come to think of it, this exposition of my intimate secrets has been beneficial, for it's prompted me to overhaul the amount of stuff I lug round with me everyday. I've done a clean - and a determined cull: yep, I've got rid of half of those semi-used tissues.

What do you conceal in your handbag?