The Lessons of Loss

September 08, 2012
Death has touched my my 9-year-old over the last two years. She sat a foot from the coffins of her great aunt and uncle at their double funeral. She watched the cremation service for her grandfather, mourned the loss of a schoolfriend's mother and attended the burial of the kind man at church who had given her his collection of vintage toy cars.

The disappearance of familiar faces baffled, but did not unduly grieve her. She tried and failed to imagine the people she'd known nailed into the wooden boxes. She gathered fragments of memory - her grandpa's flourishing bow when he opened the front door, the ice cream the friend's mother had bought her - and tried and failed to comprehend that they would do these things no more.

But life continued its orderly path without them and she moved serenely onwards with it.

It's taken the disappearance of a small black cat to teach her the reality of loss. Harry was her baby. She'd race upstairs from school to see if he was on her bed and shrill a special signal if he was. She would read her homework books with his head on her knee and lie beside him on the trampoline where he sunbathed. Her duvet is slack and cold without the weight of her sleeping pet. Her bed, once her refuge, is now haunted by his absence.

'Pets,' a woman stacking cat food once told me, 'help children develop.' Ten months after acquiring our kittens I realise she was right, but not in the ways I'd expected. Harry has taught my little girl to grieve. More than that. He has taught her, more vividly than Sunday School preaching, the value of invisible gifts - of dependence, nurture and love - that privileged children take for granted.

For her birthday this month she had craved Hollister tops, Vans shoes and an iPod Touch. Now she would willingly ditch all of them. 'There's only one thing I want for my present,'  she says. 'And that's to cuddle Harry again.' 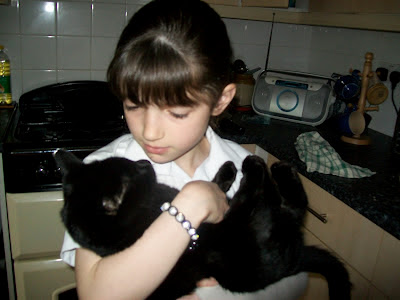