December 16, 2012
Dear [Name to be supplied. Note to Vicar: check your address book for anyone we've left out],

Well, would you believe another twelve months has gone by and we are all a year older (and wiser, of course!!) than we were this time in 2011! And that means it's a whole year since I tried my hand at the art of the round robin, inspired by so many wonderful newsletters from dear friends I'd forgotten I had! As a raw beginner, I only managed a few pages of my own because ones lunch dates and the little successes of ones children all tend to merge into a golden haze over the course of a year, but this time I've kept a detailed daily diary so I'll be able to share properly with you the highs and lows family life in 2012!!

As the Vicar and I were only saying to each other last week, our children never cease to amaze us! The year began well for the 8-year-old. He came home from school to tell us that he had come second in his class! It turned out that he was on the second table of ability! Out of two!! As you can imagine, we were so proud, because if there had been three tables, he might have been on the third! And he wasn't, which is testament to his stalwart attitude to learning! As his teacher said, there's never a peep out of him in class, even when she tries to catch him out with a question!

February was a month of bins! Every week on bin night foxes strewed our Tesco Value meat wrappers over the highway!! If I'd known our provisions were going to be on public display I'd have gone to Waitrose! Luckily, we discovered that we could stuff some of our kitchen bin liners into our neighbour's wheelie and thereby ease the pressure on the council litter pickers. Should she realise, I know she'd be grateful because if the council discovered how much bigger her bin was than her needs they'd have it off her. That's the thing about vicarage life: one always has to have a helping hand at the ready!

February merged, as it always does, into March and brought with it our new fridge! It was a gut-wrenching farewell to our old friend - every stain was a gastronomic memory - but life, I've learnt, is full of painful partings and brave new chapters. Our brave new chapter was delayed because John Lewis had forgotten to mention that the fridge we'd ordered wasn't manufactured any more!! I had to wait in two days for the delivery, but it's so energising to wake up with a purpose and it gave me a wonderful chance to become good friends with Adil from customer services who had a very sick mother-in-law!

Hot on the heels of March came April, and, while those poor people in Syria were fighting for survival, our own life and death battle was being waged in the vicarage garden! My beloved herbaceous perennials sat huddled like refugees on canvas sheeting on the lawn while I battled the menace of creeping buttercup which had invaded my borders. Now I shudder when I hear the headlines of some new atrocity driving people from their homes for, although, of course, their plight is in many ways worse than mine was, it brings back painful memories of what I and my poor leafy babies had to endure!

Summer, of course, was the season of sporting glory and both children won gold medals during the Olympics - for 'gold' panning at Willows Farm children's activity park! Apologies to all of you who didn't get a postcard from our fabulous week in sunny Cornwall! I'm enclosing a picture pull-out of highlights so you can enjoy it retrospectively for yourselves! The 8-year-old proved himself to be a champion underwater swimmer! Every time we put him on a surf board he'd topple off backwards so comically - he's a born clown! - and remain submerged for fantastic distances before emerging howling with excitement! He wept when we praised him, but that's our wee man all over - he's inherited the family modesty!

September saw the church fete as usual! I was the one chosen to put my head through a hole at the Soak the Sunday School Teacher stall and it was amazing the alacrity with which the parish paid to hurl sponges at me! They told me the attraction had never been so popular!!

October was a month of culture. There's nothing more invigorating than hearing West End musical hits belted out on a London stage - yes, the Mothers Union singing group is going from strength to strength in the church on Friday mornings!  And come Winter, the 10-year-old was also treading the boards! Yes, after a year of drama fees she was finally honoured with a part in the annual theatrical extravaganza - as a Christmas cracker! Sadly, tickets were limited so only her proud parents got to hear her recite her line, but you can watch my video of the three-hour show here on www.mykidisbetterthanyours.com.

Our social life was as busy as ever! Really, I don't now where the time goes! It's hard to believe it was way back on the 5th March that I had a mocha latte with Jacqueline and Miles.....

But enough of us! We often think of you and your lovely family/spaniel/villa (Note to Vicar: delete as appropriate) and wonder how you are getting on! I do hope to meet up with as many of you as possible in the New Year and fill you in on the titbits I didn't have room for in this short letter!

Happy Christmas and may your New Year be as blessed and successful as I know ours will be! 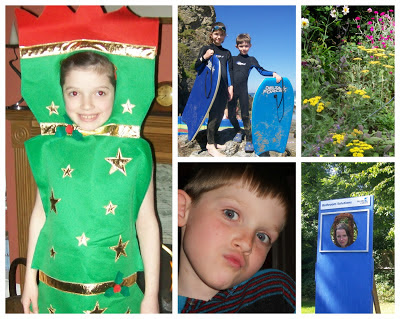