June 17, 2012
A journalist, mourning the golden age of Fleet Street in The Spectator magazine recalled a 'twinkle-toed' colleague, who 'tap-danced on the office desk singing Powder Your Face With Sunshine.'

That colleague was my father.

I, remembering the golden-age of infancy, recall a long-skirted figure with a head piled with bananas, emulating Hollywood's Brazilian Bombshell, Carmen Miranda, during bathtime.

That figure was my father.

My father, in the 1970s, was a pioneer. While my mother went out to work he became a stay-at-home-dad. It was he who devised chase games to brighten the uphill walk home from school and who cooked us suppers of corned beef fritters and home-made chips. He was the only dad in the school who owned an evening gown worn to startle us with impromptu theatricals.

Tirelessly, the man who had interviewed the Beatles and travelled the world for a headline, read us Listen with Mother stories, played London Bridge is Falling Down on the bed and left grotesque faces on our drawing boards to thrill us when we woke.

I do not normally heed Father's Day. I suspect it's a festival dreamed up by big business to boost sales. But this morning I learned that both my father-in-law and my father are worryingly ill. The latter, yesterday, faced a devastating dilemma: whether to take a drug that would protect him against a potentially lethal blood clot, but that could also rob him of his remaining chink of eyesight.

He has chosen to preserve the eyesight. And so I am observing this Father's Day with intensity.

'Mummy gives us love,' a four-year old me once memorably declared, 'But Daddy gives us fun.'

I realise I was only half right. My father has always given us both in unstinting quantities and he and all committed fathers deserve 365 dedicated days a year in tribute. 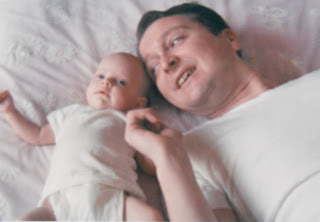