How to Be Happy

October 03, 2012
Now that austerity has deflated national economies, governments are switching their attentions to that elusive asset: happiness. David Cameron plans an official assessment of the nation's spirits, China has launched a happiness index for local government officials and deep in the Himalayan kingdom of Bhutan a Gross National Happiness Centre is under development to teach its disproportionately suicidal citizens how to count their blessings.

The secret to happiness has, however, already been cracked by a housewife in a Manhattan penthouse. The Happiness Project, in which Gretchen Rubin set herself a 12-month deadline to achieve bliss, planted her at the top of the New York Times' bestseller list and now, after all that questing, she's found the darn thing - it was lurking in her own flat all the time.

Yours could be festering in your home too, unnoticed under the sofa cushions. To find it, according to Rubin in her latest DIY manual Happiness at Home: Kiss more, Jump more, Abandon a Project, Read Samuel Johnson and My Other Experiments in the Practice of Everyday Life, you have to start with 'redecoration of the self' (sorting out your cupboards). Then you are ready to create 'areas of super engagement' (a mantel of family photos/heirloom silver/grandad's collection of significant champagne corks). After that it's simply a case of drafting a kissing schedule to prove your love to your spouse and offspring, raining down gold stars and compliments, particularly on men, jumping about and going to bed early.

It's a relief to know that I'm on the right track. Dinner guests are always dislodged from our vicarage by 10pm. I jump on the children's trampoline whenever it rains violently and family and cats get a kiss each bedtime. The 30 volumes of my daily diaries occupy two shelves of 'super-engagement' in the dining room and I am ruthless in my binning of other people's possessions to make way for my own. I'm more into Samuel Pepys than Samuel Johnson but I'm expert at abandoning projects and my kids receive gold coins, one up on gold stickers, when they've accomplished their weekly chores.

It's not enough, though. Contentment, yes, and pleasurable smugness are induced by the above, but I've been experimenting for far longer than Rubin and I can exclusively reveal that complete happiness is impossible without these essential ingredients:

Achieving your desired slipway just as traffic grinds to a halt on a motorway.

Unblocking the sink. If your sink isn't blocked you can easily rectify the fact with a bowl of old porridge and some coffee grounds. Then treat yourself to the visceral thrill of pumping the rubber plunger over the plug hole and watching as, with a fulfilling belch, last week's washing up water suddenly swirls away. For some reason, the more regular task of picking dead slugs out of the kitchen drain, while prompting the same result, lacks that nameless joy.

Nicking gum. You may not even like chewing gum. I don't. But stealing a piece from your children's illicit stash while you're dusting their bedroom mayhem gives it an unexpectedly enjoyable flavour.

Creating a leaf pile. Don't worry if you don't have your own leaves - you can import them in bin liners from a neighbour's front garden. This is one of the few thefts they'll thank you for. Rake them into a large mound (this is in itself a peculiar pleasure) then take a running leap and bury yourself inside. It can be squidgy and you can often find the back of your neck becomes intimate with molluscs but it gets you under the skin of that most thrilling of all seasons, Autumn. 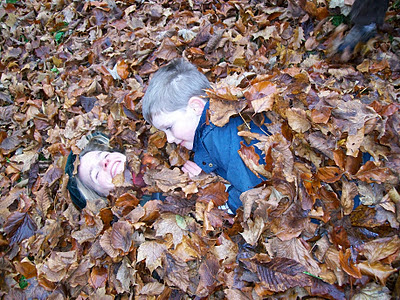 Removing the lid of the lavatory cistern. This is a joy I discovered early on in life and, nearly four decades later, it hasn't lost its potency. There's something wondrously soothing about watching the ball-cock sink as the cistern empties then rise with quiet majesty with the water level. Efficient sewage disposal suggests that all can be well in a disordered world.

A CD of John Rutter. Step 1: wait till dusk gathers and put on the lamps. Step 2: pour yourself a lager. Step 3: pile beside your armchair a decent detective story, a frivolous magazine, a woolly rug and the Boden catalogue. Step 4. Unleash Rutter.


A stationery drawer. This needs to contain a sheaf of Basildon Bond for the letters you mean one day to write and a couple of handsomely bound notebooks for the Great Thoughts you may one day have. It doesn't matter if Great Thoughts elude you. The fact that you have a worthy repository ready should one ever take you by surprise is enough to make you feel good about yourself.

A utility room. I owned one of these for eleven months and it's fair to say I tasted bliss. Mr Sheen sat decorously beside Mr Muscle on the cleaning shelf, instead of rolling louchely together under last year's ironing, and I could reach for a lightbulb without summoning a child to haul me by my ankles from beneath the tower of homeless possessions flung into the under-stairs cupboard. 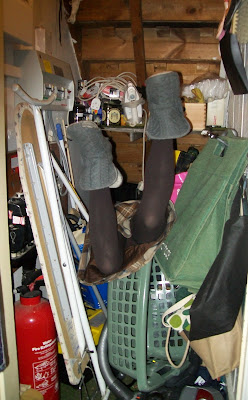 I too would like to top the New York Times bestseller list so spread the word and I'll share the royalties. And tell me - what tips can you add for DIY happiness in the home?